What Color is Saffron? About Saffron Color

In this article, we’re going to to explore the question of “what color is saffron?”

Saffron not to be mistaken by the spice… we’re going to talk about the Saffron color in detail.

Colors have the power to affect the mood of people with its visual appeal. So, you may respond to some colors that influence your temper, emotions, feelings, and the state of mind. Colors can heal the soul and boosts the positive thoughts. The flashy, vibrant colors can stipulate the mind for an effective healing of the body.

The colors like Saffron (derived from the Arabic word Zaffaran) can exude positive energy in people that boosts the energy of people. So if you are wondering what color is saffron, then read this to know more about the mystical color.

What Color is Saffron

It has two variations:

If you are interested in watercolors or finger painting, then you may understand the mixing of colors. Two or more colors are combined to obtain a new color that has a different tone to it. 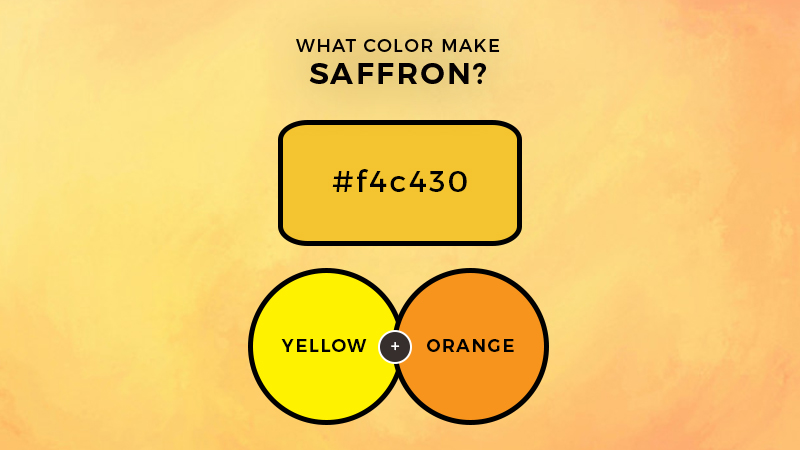 The Saffron is obtained by;

If you’re looking to recreate the saffron color digitally you can reference the RGB saffron color code. In the computer world (RGB) the deep saffron is composed of the following color compositions

Whereas, if you’re looking for the CMYK color code then the saffron color is composed of:

You may feel excited to know that each color has a different meaning to it that signifies its importance. In connection with religion, what color is Saffron? It is a pious color that signifies deep meaning in several beliefs.

What Color is Saffron Psychologically?

It is a color that symbolizes the path of enlightening or new beginnings. People who wish to develop a new vision favor the saffron color. It means that new light has come in your life that will eliminate the negative forces and fill you with positivity. It gives a new perception for that will transform the personality for betterment.

The famous application of the saffron color is the use of the Indian Flag. If you are thinking what color is saffron, then it symbolizes courage in Indian Flag. The top band of the flag has Saffron that signifies the strength and courage of the people of the country.

The Saffron is a sacred color that plays a significant role in meditation for relaxing the body and soul. It denotes the sacrifice and growth of the self that will create wonders in your self-development.

We hope you learned a lot about the Saffron Color. Now when someone asks you “what color is saffron?” you can intelligently explain to them the history and meaning of the color and how to recreate it by mixing the colors yellow and orange.