What Color Does Red And Green Make?

Have you ever asked yourself, “What color does red and green make when mixed together?”

When it comes to mixing colors, it may not be as straightforward as what you see on the color wheel. Using different methods of color mixing, such as overlapping colored lights versus combining pigment, the resulting colors are extremely different.

If you’ve ever wondered what color does red and green make, we’ll explore the answer in the two different color combining methods.

What Color Does Red and Green Make? 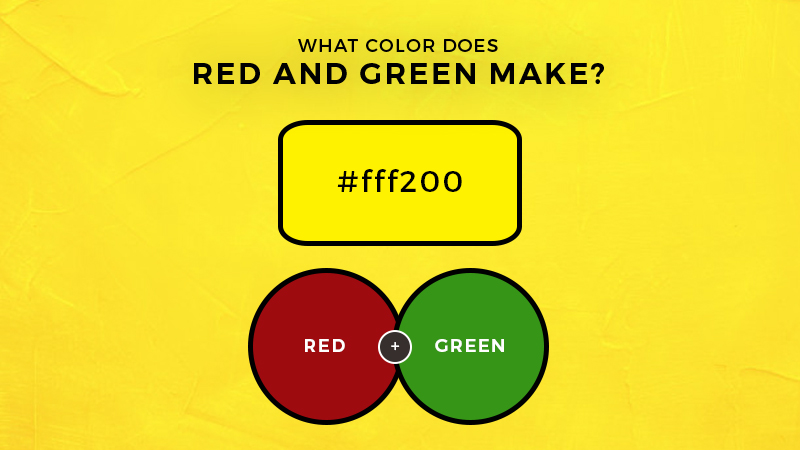 Essentially, there are two methods for mixing color: Additive and Subtractive. Depending on the method you use, you may get a different color than you were originally expecting.

Additive mixing is not the traditional method that we think of when mixing colors. However, in today’s technology driven society, it’s a pretty common method that we see almost daily without realizing it.

With additive mixing, you use varying combinations of spectral light to mix colors. This method is often used in media, most commonly how colors projected on television screens and computer monitors are produced.

There are two ways that colors can be combined using additive mixing: 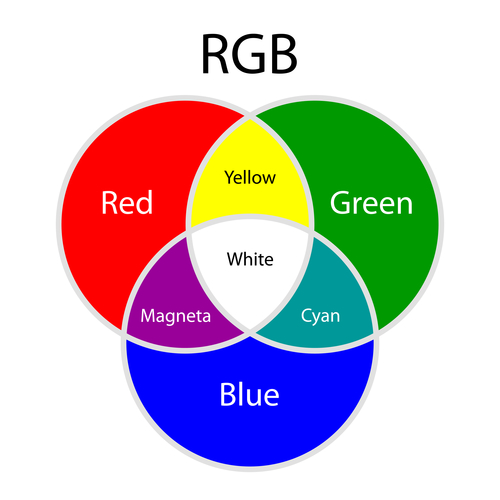 When it comes to light or screen color mixing, this method uses the RGB color wheel. In this form, red, blue and green are the primary colors of light used on the wheel. The secondary colors are formed by the mixture of two primary colors, resulting in cyan, magenta and yellow.

Looking at their placement on the RGB color wheel, when red and green are mixed together, they make the color yellow.

The RGB color wheel for producing colors using light spectrums is almost opposite of the CMYK color wheel used traditionally for mixing colors in art and print processing, a method called subtractive mixing.

Subtractive mixing is a more intuitive method of mixing color, one that we often associate in the traditional sense of color mixing. Subtractive colors are seen when pigments within an object or liquid absorbs white light while reflecting the rest of the pigments that make up its color.

For example, the color red reflects all the wavelengths of white light except for the red pigments, which is how our minds perceive the color.

This is the most common method of color mixing, as we see it everywhere in regular objects. It’s also used in the process of print production. 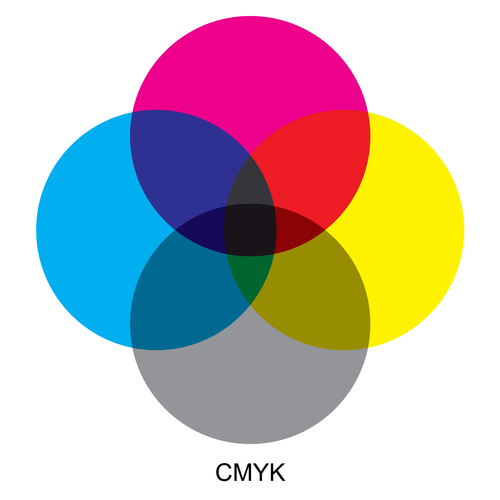 However, the secondary colors are the same as the primary colors on the RGB wheel (red, blue and green).

In print processing, color combinations are produced by overlapping layers of the primary CMY colors in varying percentages of transparency. Once the colors are overlapped, light is transmitted through the ink and reflects off of the surface below, called the substrate.

The CMY ink is applied as halftone dots and subtract the inverse percentages of RBG from the reflected light so that our eyes perceive the intended color.

Complementing colors refer to two colors that sit across from each other on their prospective color wheels. The two opposite colors will often turn gray when mixed together.

In the CMYK model, red and green are presented as complementing colors. However, when you combine red and green, they can vary in shades of brown to gray depending on the particular shades you are using.

For example, a blue-green and red may combine pigments that appear as a gray color, since it is using mostly cool tones. However, a saccharine green and red mix to make more of a brown clor, due to the yellow pigments in the green contributing to warmer tones in the combined color mixture.

As you can see, there are a couple different answers to your question, “What does red and green make when mixed together?” Depending on the method you use to mix the colors, you may see a lovely yellow glow on your screen or a shade of brown or gray in your print.

When deciding which colors to use, knowing the media or method in which you plan to mix them will help you make the best decision for your intended outcome.

Play around with different colored lights and paint by mixing red and green together to see the results for yourself. Now that you know what color does red and green make you can start creating stuff and sharing it with your friends.